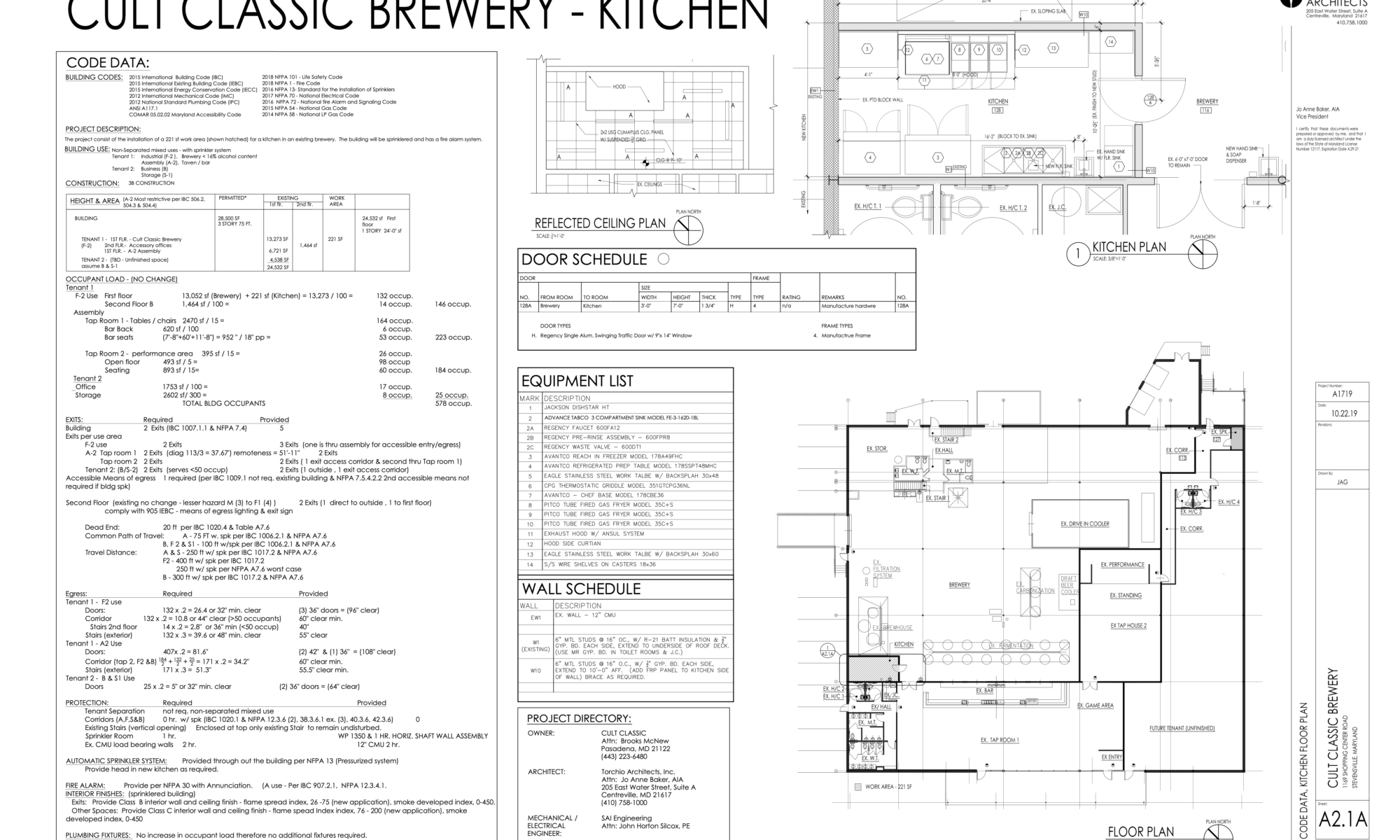 We have very exciting news, we’re finally building a human sized kitchen to meet your needs.

What does this means?

We’re planning to expand our menu, not just increased food options, but with the new kitchen, we’ll be able to apply for a Class 7 license which will allow us to also sell wine, cider and distilled spirits. It also means that we’d be able to stay open later, so no more last call at 10pm

How will this affect my ability to get your beer?

Excellent question, in order for our construction team to effectively work without disturbing your ability to enjoy your favorite beers, we’ve adjusted our hours.

(Don’t forget, we’re here to serve you from 10am-10pm on Veterans Day with a 30% discount on your visit for all patrons with a military ID.) 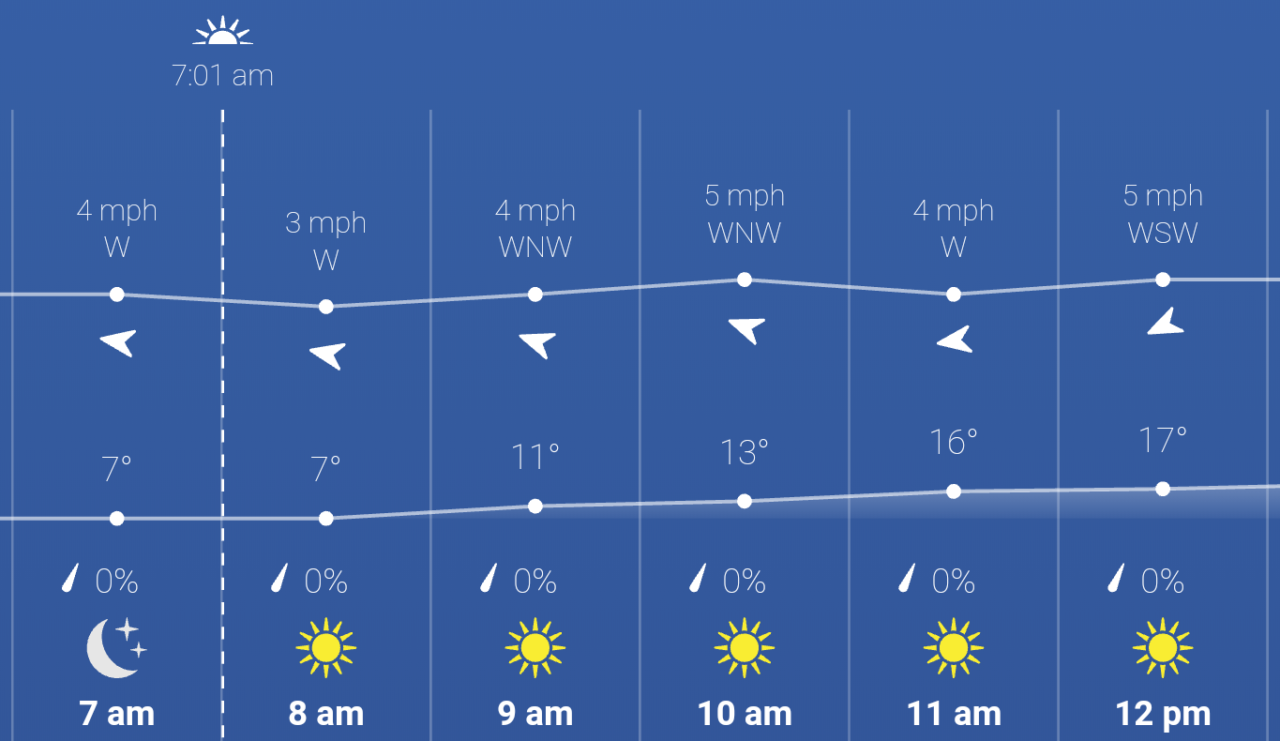 We’re anxious for the cold weather to break so that we can move forward with building the new entrance ramp. Not only is it a bit cold for excavating the ramp’s foundation – they can’t pour standard concrete in this weather. 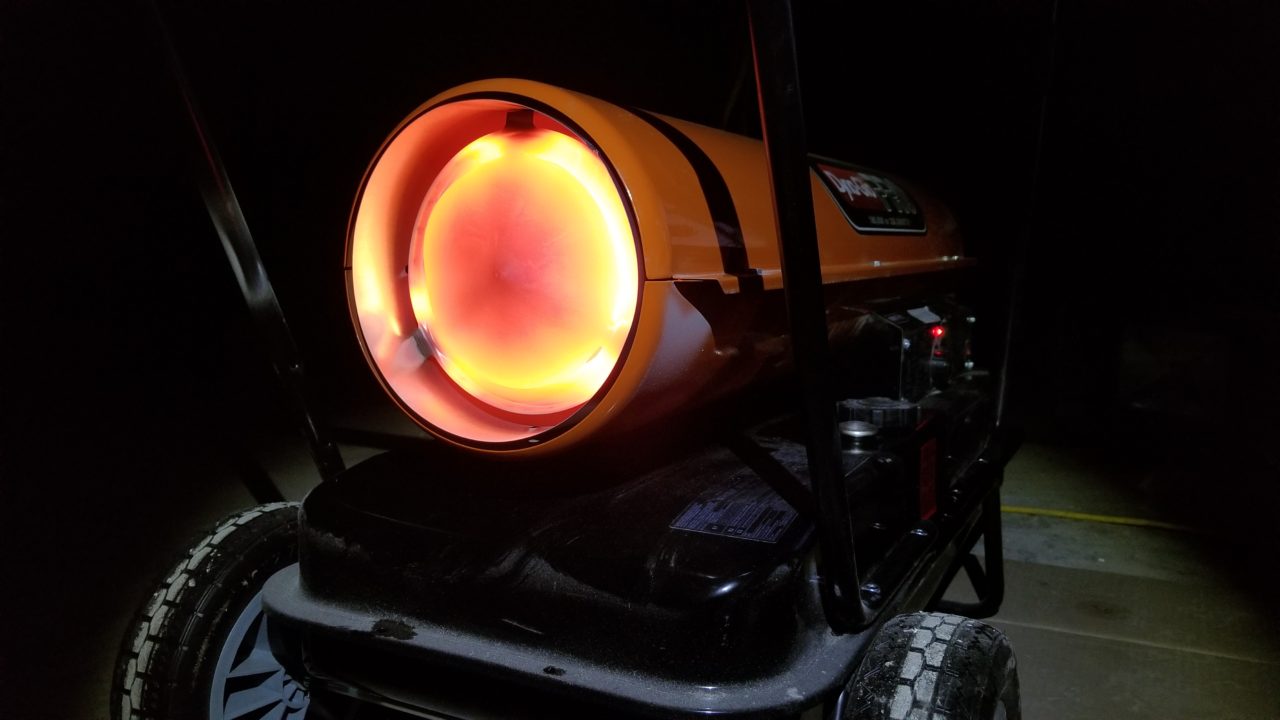 Since timing is everything… the cold hit after the old HVAC system was removed but before the new one was installed. Ironically, we’ve got to wait for warmer weather to install the new heating system.

For now though we’re heating with a couple of kerosene “torpedo” heaters to keep the work crews happy (not to mention preventing the pipes from freezing.)

You really get a sense of how big the building is when two of these demons can barely sustain 50 degrees inside! Fortunately they’re good enough to let indoor work proceed while we all complain about the weather. 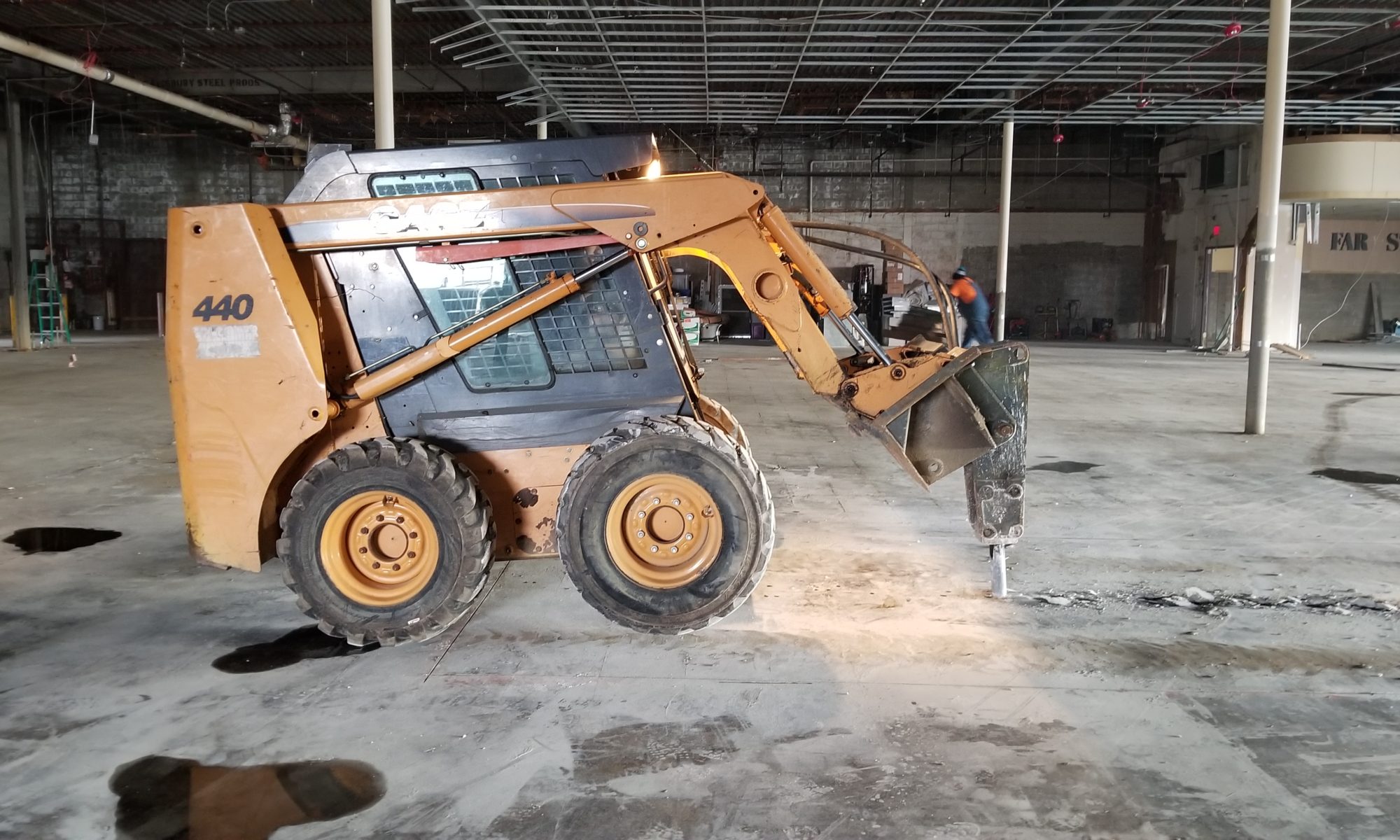 Now that the edges are cut, the concrete to be removes is jackhammered into pieces that a bulldozer can remove. This is a loud and dusty job… but so satisfying. 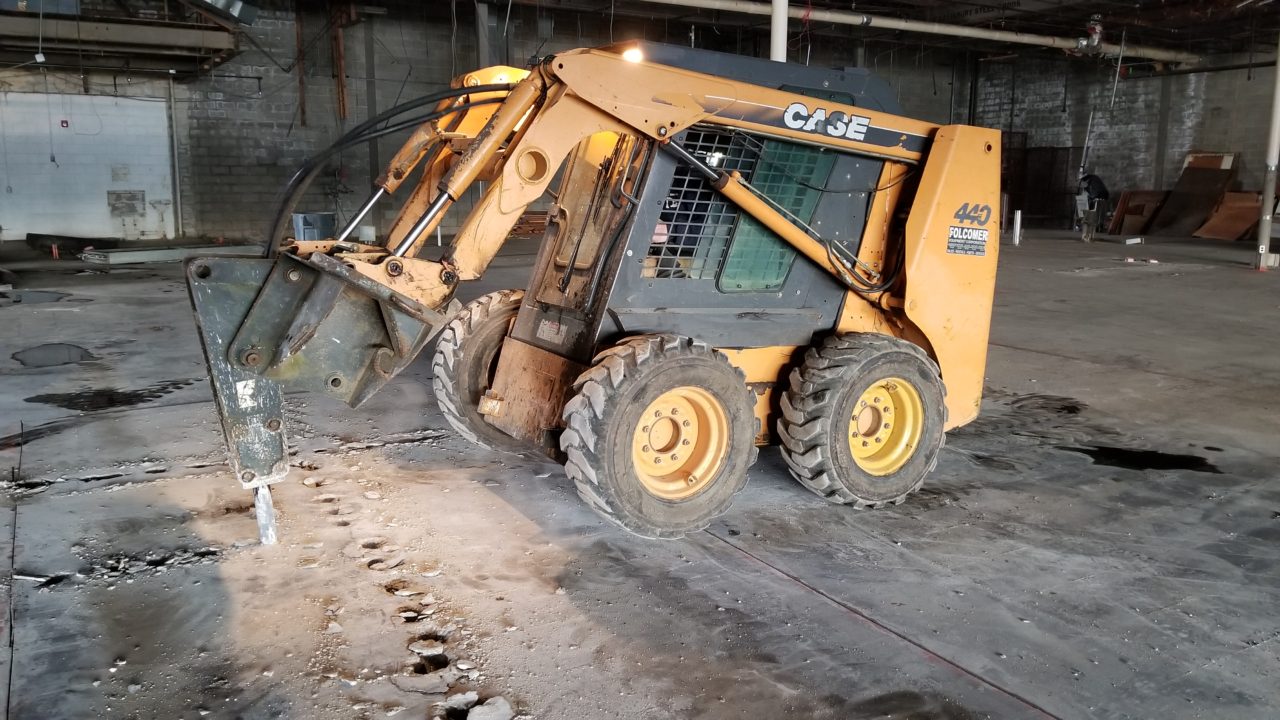 The jackhammer basically perforates the areas to be removed. 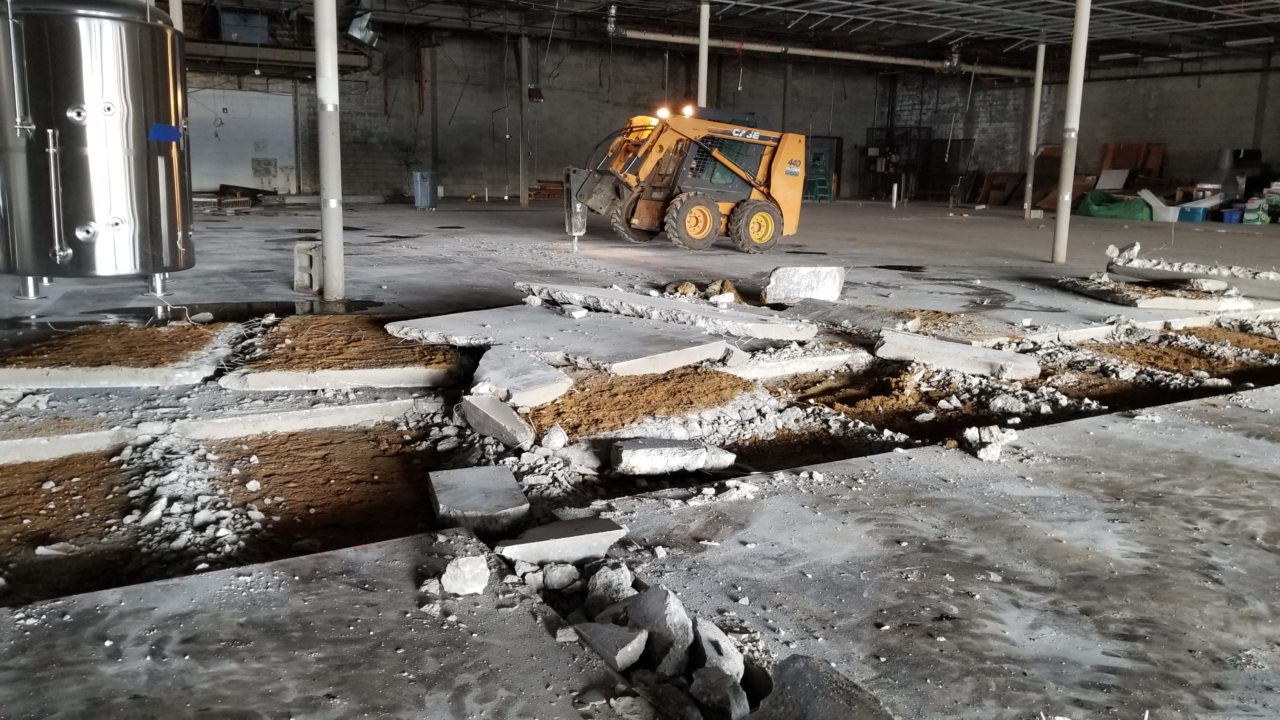 Slabs and chunks waiting for the bulldozer. 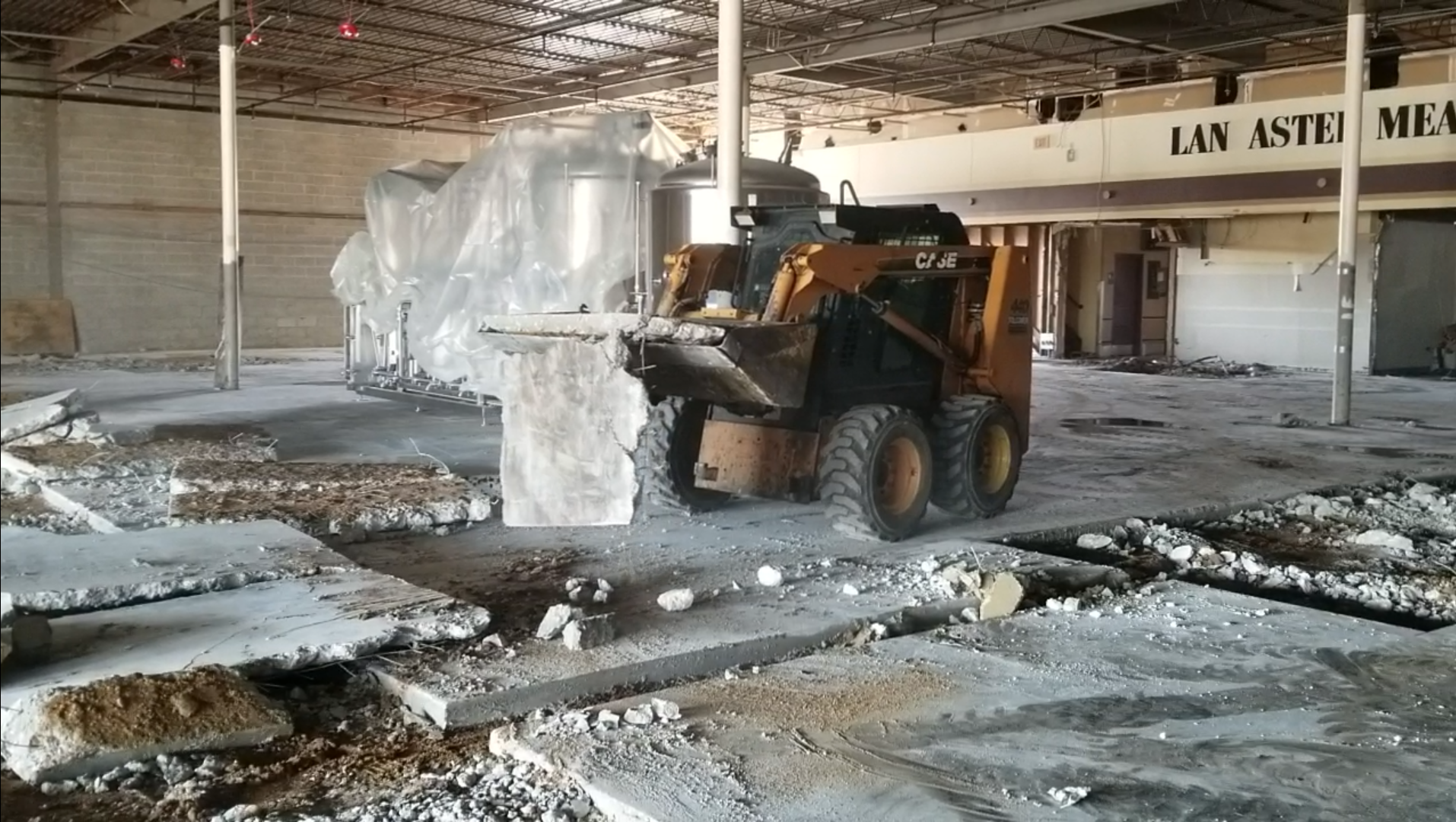 The jackhammer attachment is swapped for a bulldozer bucket. 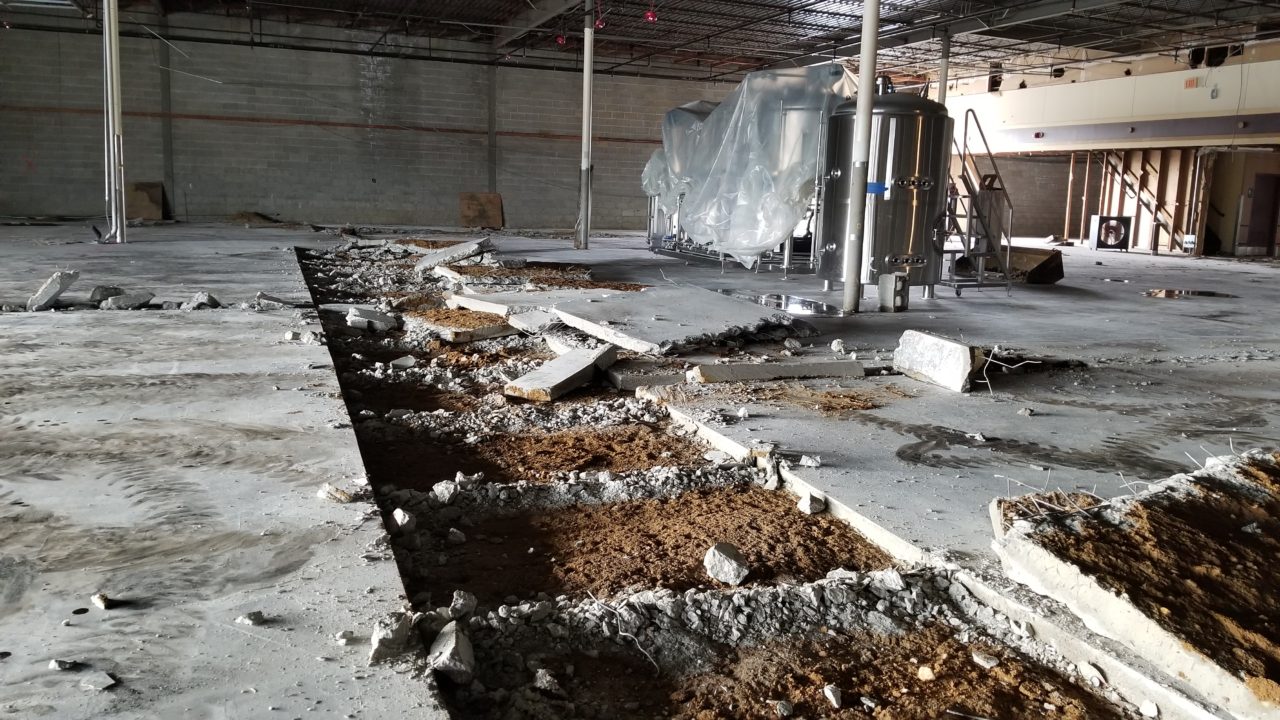 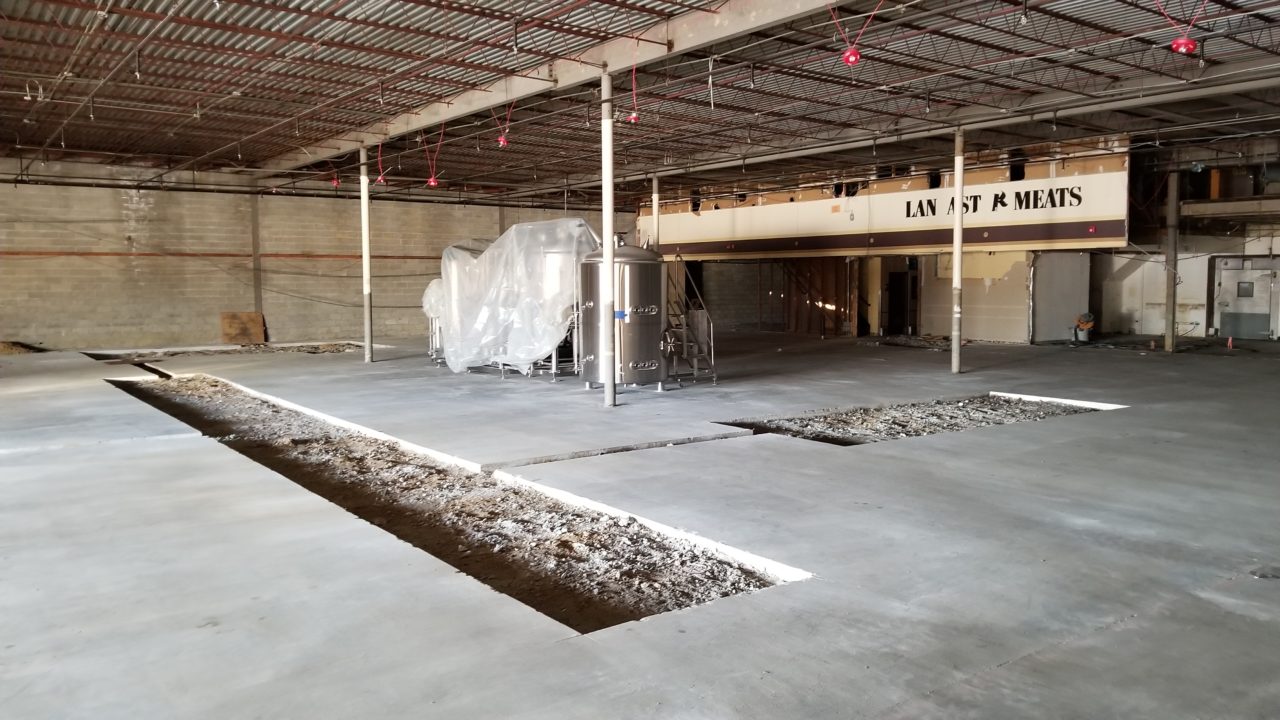 After the bulldozer was finished, the next day was all about shoveling out the small debris and sweeping out the entire building. 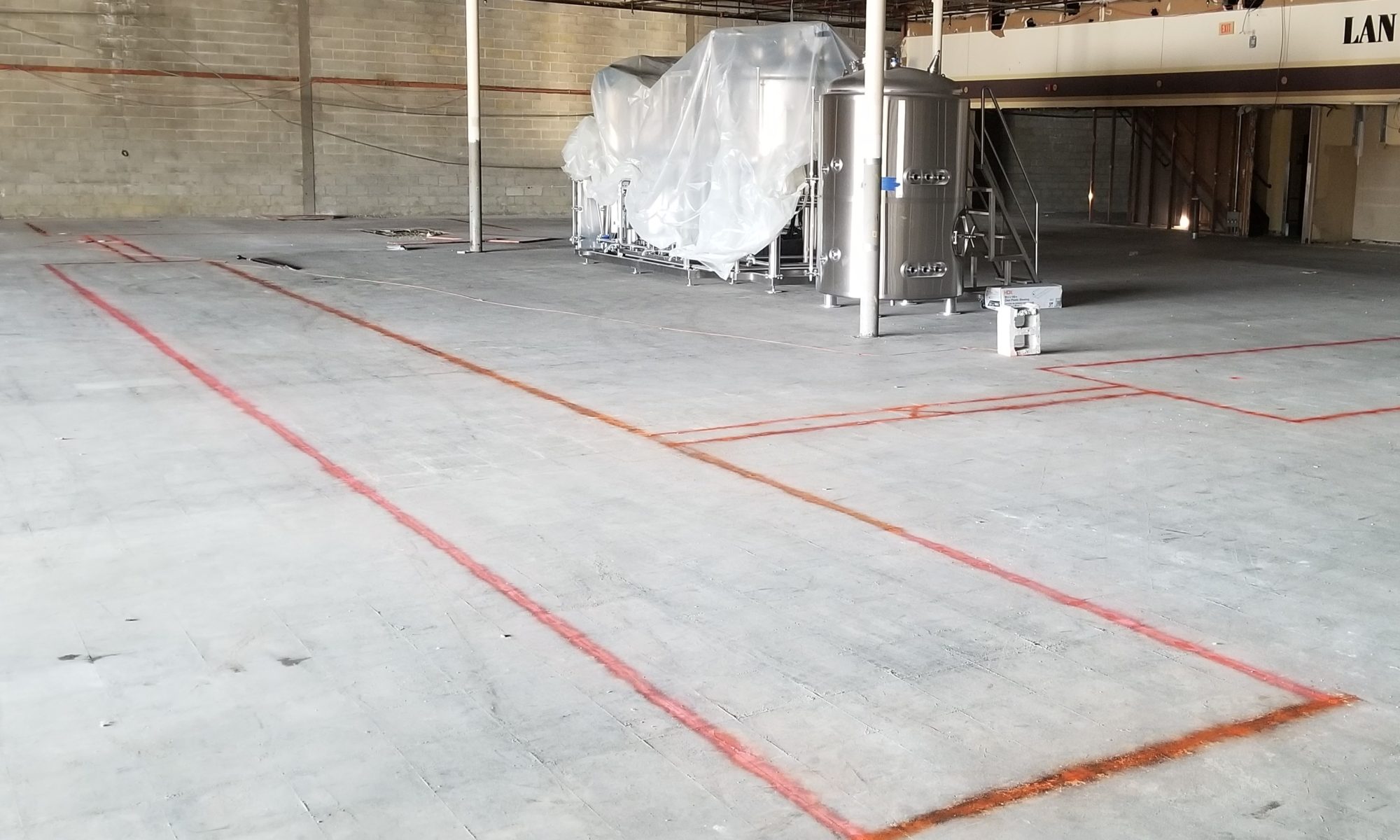 Work has begun on the concrete floor. The largest areas will be cut out to add sloped-floor drainage, others drains are being cut for restrooms, bar drains, and plumbing. 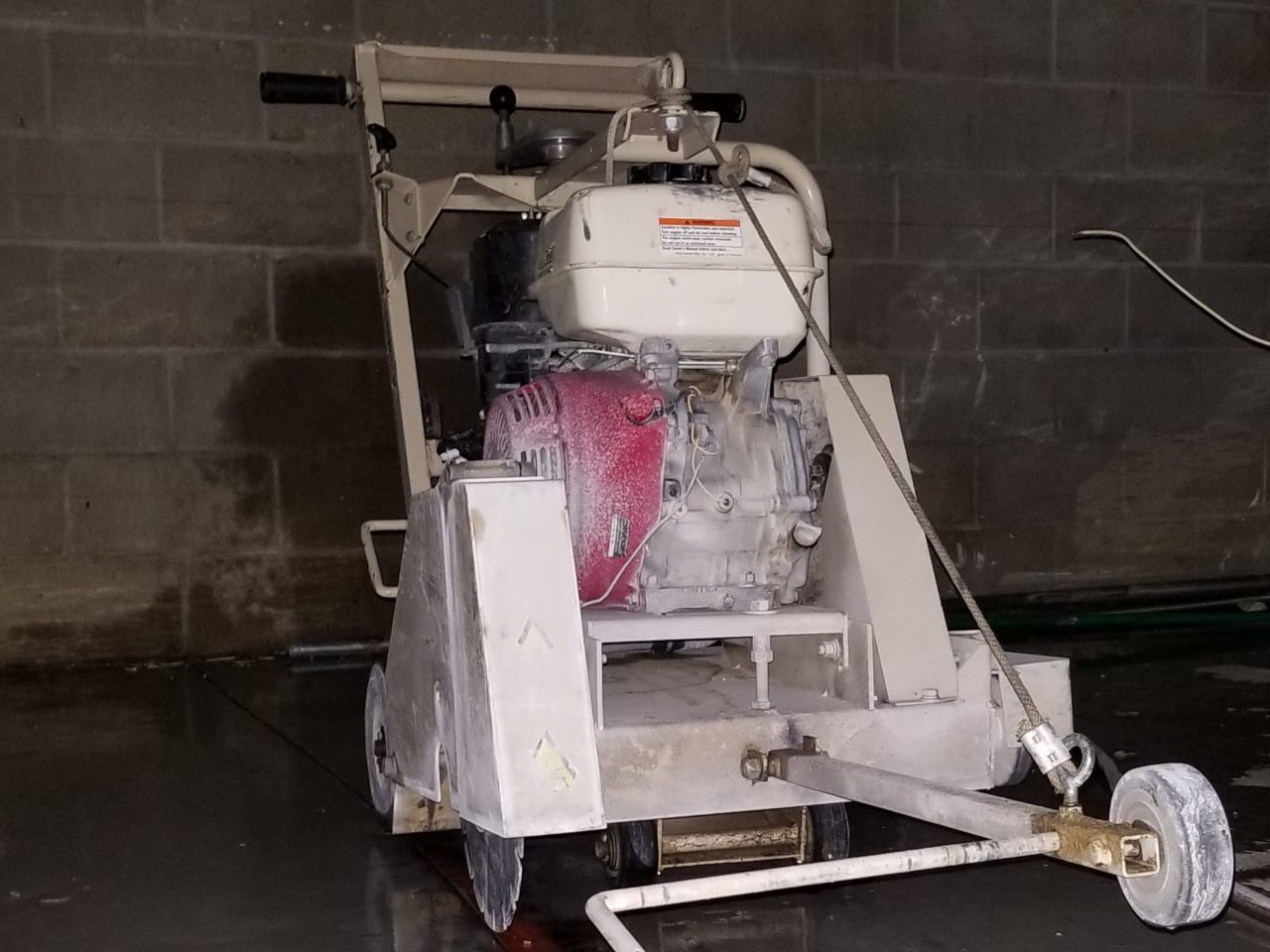 This machine does a lot of damage in the wrong hands… which is why I’m not allowed to touch it. The water-fed wet saw prevents choking everyone with concrete dust , then a shop-vac is used to suck up the leftover slurry. 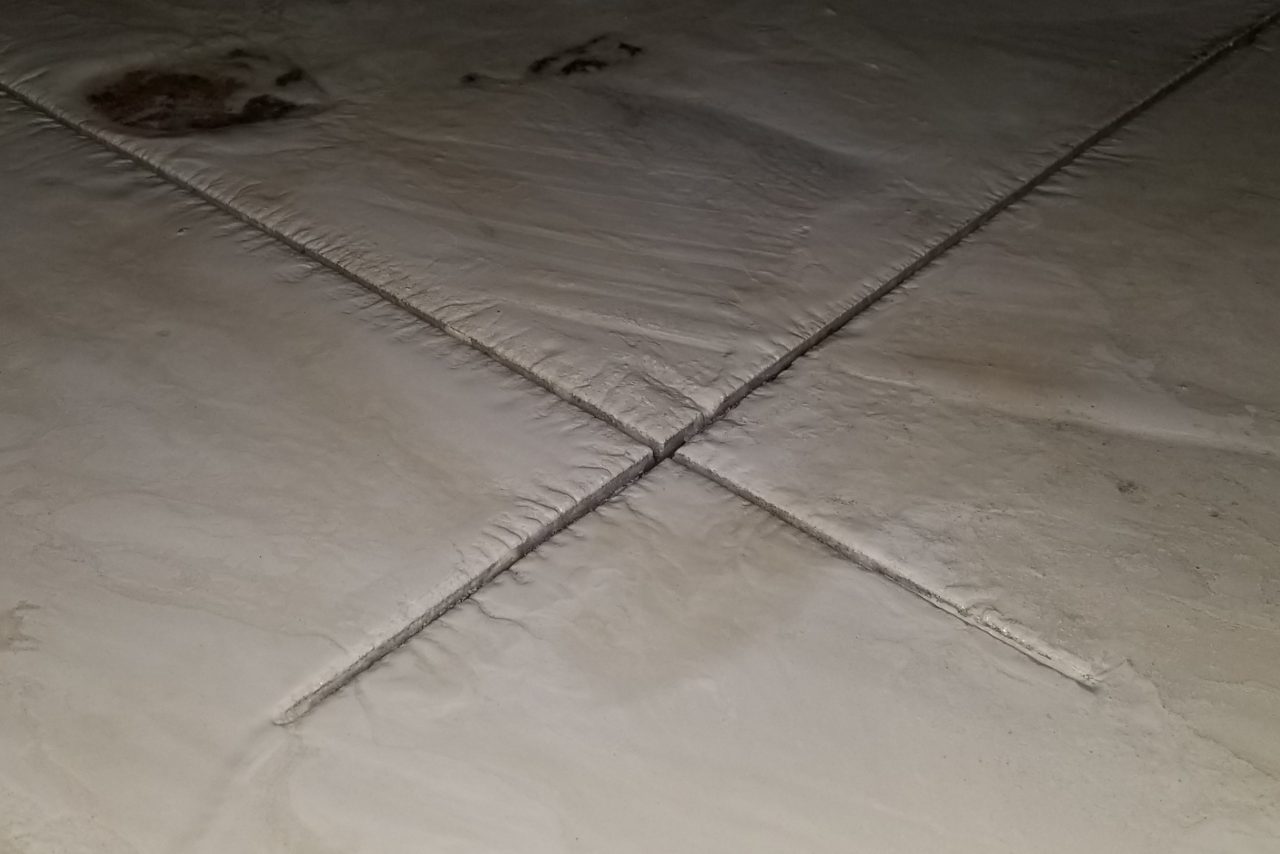 This photo makes it look kind of like fresh snowfall, but that’s all the powdered concrete slurry resulting from the cuts.

The cuts give a clean edge to all the areas where concrete must be removed. Next, a jackhammer will be used to break up the unwanted areas, and then they’ll bring in a small backhoe or bulldozer to scoop up all the chunks.

Once we’re down to dirt, the dirt will be trenched for plumbing, and groomed to the desired pitch for sloped drain floors before fresh concrete is poured. Expect a lot of photos to come! 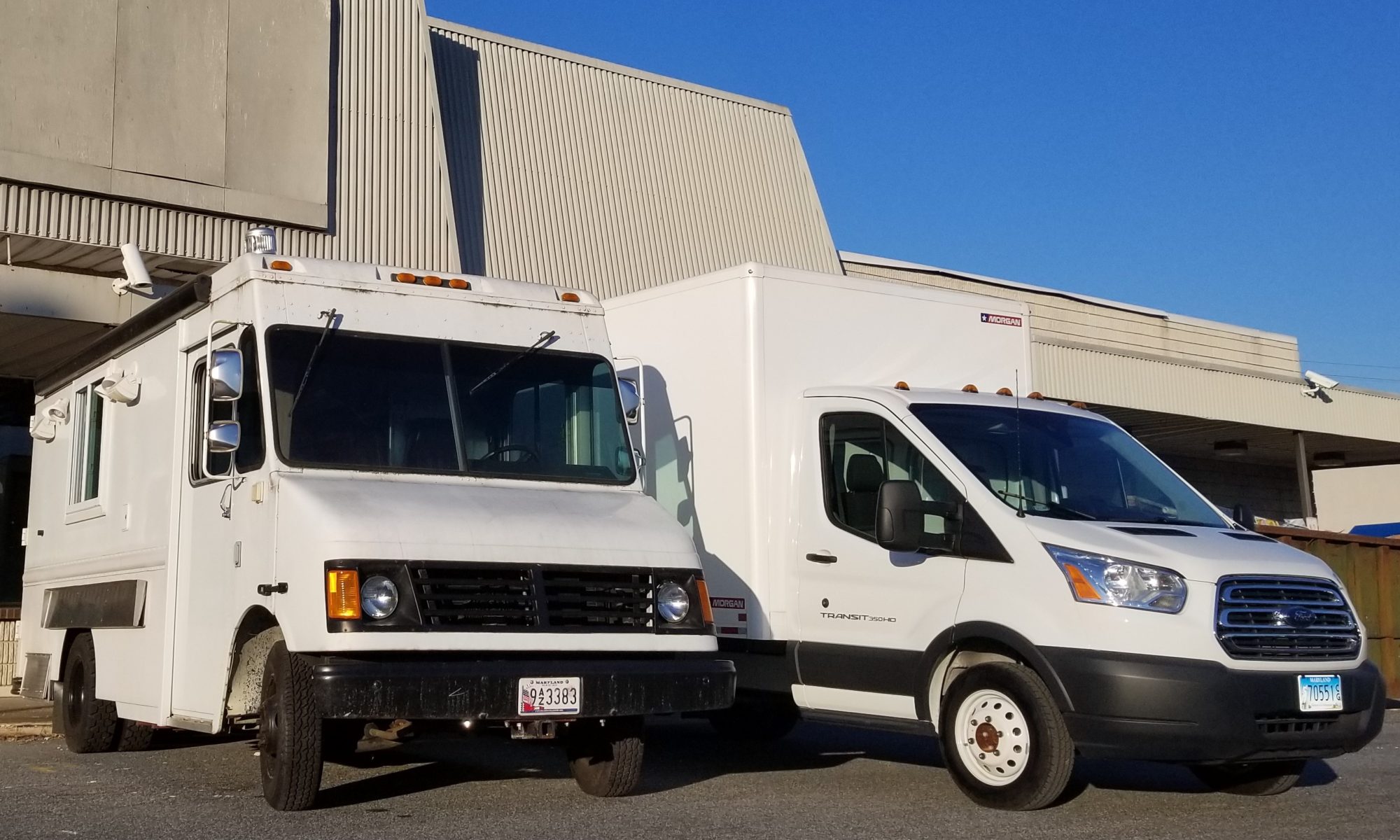 We’ve got two new trucks at the brewery. A cargo box truck for beer deliveries, and a food truck (belonging to our partners) to serve the taproom and mobile events. Both of them will get vehicle wraps with the brewery logo.

Inside, the delivery truck is pretty boring but the food truck is very interesting. There’s a surprisingly full kitchen in there and the working space is… cozy. Whoever works in a food truck had better be on friendly terms.

There’s a lot of shrink wrap on appliances and boxes of utensils crammed in there, but once the food truck is a little more unpacked we’ll post some interior photos. I’m betting that everyone’s biggest question is, “What kind of food will be served?” and I’m wondering the same thing! But for now we all have to wait to find out. 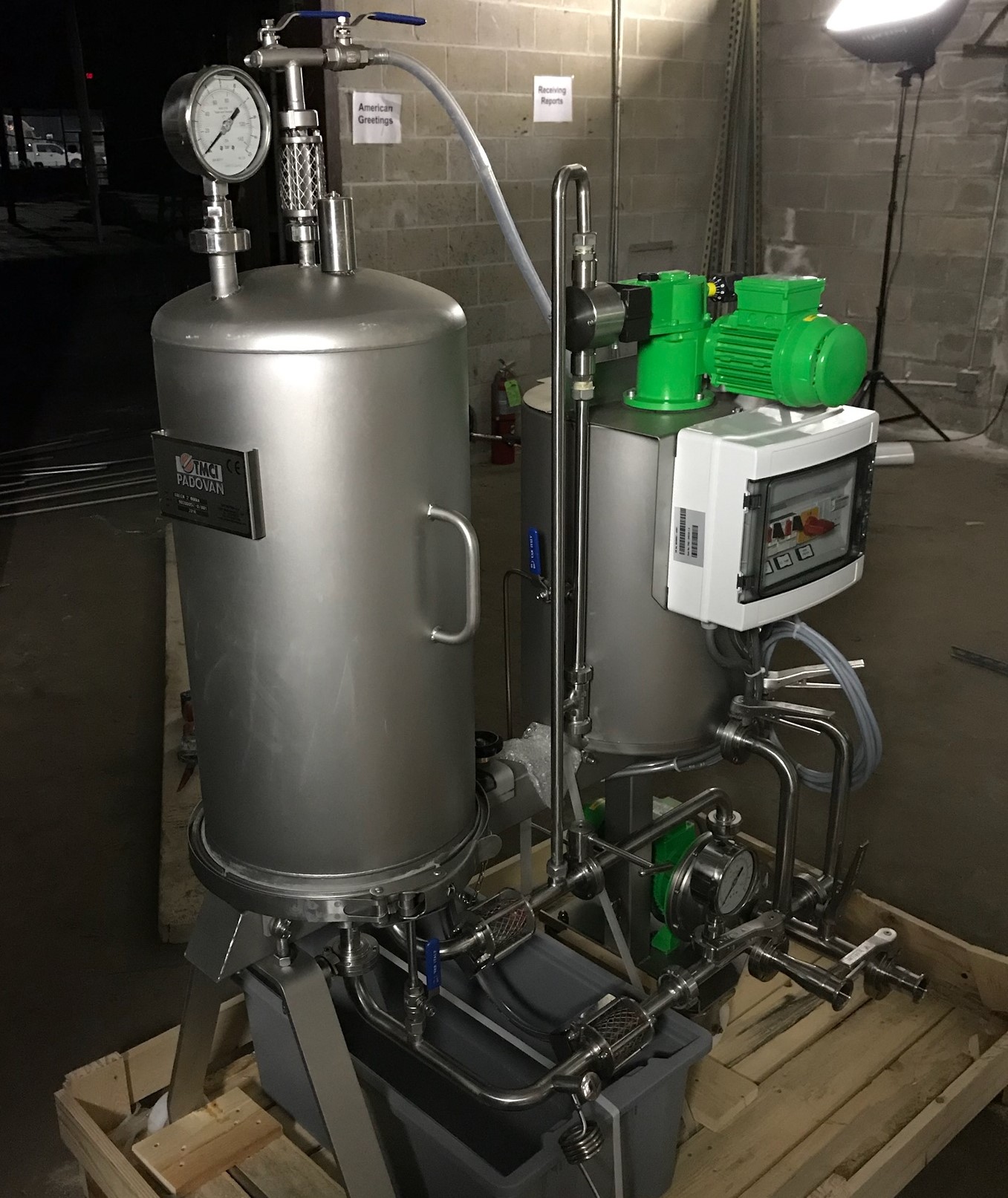 Just in – more beer gear! This Diatomaceous Earth (DE for short) filter is good for about 350 gallons per hour. DE filters are versatile since they can work with a wide range of filter material. By varying the material used, we can filter some beers to brilliant clarity, while with others we can leave in some haze… depending on what looks and tastes best for that beer. Sometimes the hazy stuff is also part of the flavor… other times it needs to go! 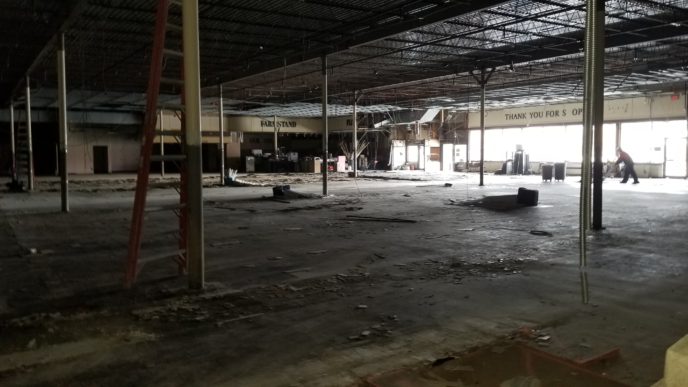 The construction crew has been hard at work demolishing the old floor tiles. They’ve got a machine (thanks again to United Rentals!) that is basically a lawnmower for floor tiles. On one hand its amazing to see how fast it chops up floor tiles, on the other hand… cutting an 8″ wide path at a very slow walking speed means it’s still a lot of work to scrape 20,000 square feet of floor area!

Today the crew was chopping, shoveling, and carting tile debris out to the dumpsters, and I’m told they’ll be at it all day tomorrow before they expect to be finished. 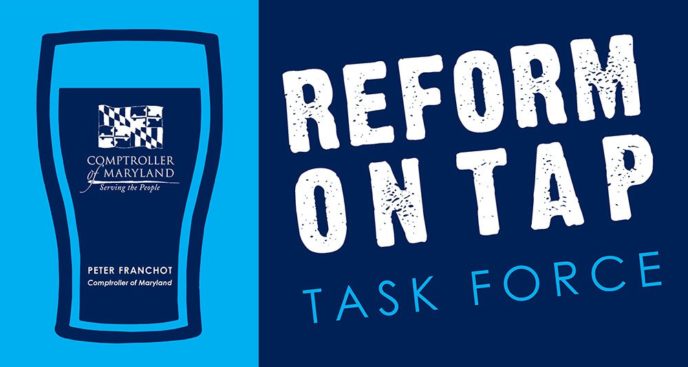 The Reform on Tap Act of 2018 proposes the following:

“We simply cannot ignore the fact that our laws and regulatory framework have stood in the way of the limitless potential of Maryland’s craft beer industry. This is going to take us from last in the region, to the first in the nation,” said Comptroller Franchot, the state’s chief alcohol regulator. “Craft breweries are innovative businesses, and each has a measurable impact on our economy and in their local communities. They attract local residents and tourists alike who appreciate locally-sourced ingredients, environmentally sustainable practices and each taproom’s distinct style.”

The legislation reflects the findings of the Comptroller’s Reform on Tap Task Force, which held eight meetings during this summer and fall to get a better grasp of the state’s current laws and the challenges and opportunities that lie ahead for craft brewers. The 40-member task force represented every region in the state and industry stakeholders including brewers, distributors, retailers, consumers and lawmakers from both parties.

“Comptroller Franchot’s legislation would provide the framework needed for Maryland’s craft beer industry to thrive” said Adam Benesch, co-founder of Union Craft Brewing in Baltimore. “Maryland brewers, distributors and retailers all stand to benefit from the continued growth and success of our industry.”

“In an extremely competitive marketplace, Maryland craft beer is an essential component to our success,” said Joe Petro, owner of Hair O’ The Dog Wine and Spirits in Easton. “Every day, customers visit my store simply because they’ve tried a new Maryland craft beer at a taproom and now want to purchase a six-pack.”

When compared to neighboring states and the District of Columbia, Maryland is home to the most restrictive laws on production, distribution and taproom sales of craft beer.

The obstacles in current Maryland law were illuminated with the passage of House Bill 1283 during the 2017 General Assembly session. Since its passage, the consequences of the bill and the state’s anti-craft beer laws have become glaringly evident. For example, Virginia has aggressively recruited Maryland brewers to relocate to the Commonwealth, and Flying Dog Brewery recently decided to cancel its plans for a $54 million expansion in Frederick, resulting in lost jobs and economic activity.
The legislation announced today corrects the harmful provisions included in House Bill 1283 and would bring the state’s beer laws into the 21st century.

“Put simply, this legislation benefits consumers. It answers their call for change and for greater choices,” said Liz Murphy, a consumer advocate who writes the Naptown Pint blog. “Moreover, data has shown that Maryland-made beer keeps dollars in our communities and that Maryland craft breweries revitalize neighborhoods, create jobs and bring people together.”
An economic impact study conducted by the Bureau of Revenue Estimates found that in Maryland, the craft beer industry had an overall economic impact of $802.7 million and supported or created 6,541 jobs in 2016. The industry contributed nearly $110 million in local, state and federal revenues, which directly supports investments in education, public safety, transportation and the environment.

Still, the state is a net importer of craft beer, meaning it consumes more (275,000 barrels) than it produces (247,000 barrels). Furthermore, the National Brewers Association ranked Maryland 47th in economic impact, 36th in number of breweries and 25th in gallons produced per adult aged 21 years and over – all indications that the state’s craft beer industry has plenty of room to grow if the arbitrary restrictions currently in place are lifted.

“I’m looking forward to working with our local distributors, retailers and fellow brewers in the upcoming legislative session to pass a bill that grows the Maryland beer industry overall,” said Julie Verratti, co-founder of Denizens Brewing Company in Silver Spring. “The work of the Reform on Tap Task Force has created an opportunity to move our state forward, grow jobs and increase economic opportunity for multiple sectors. I, for one, am proud of that.” 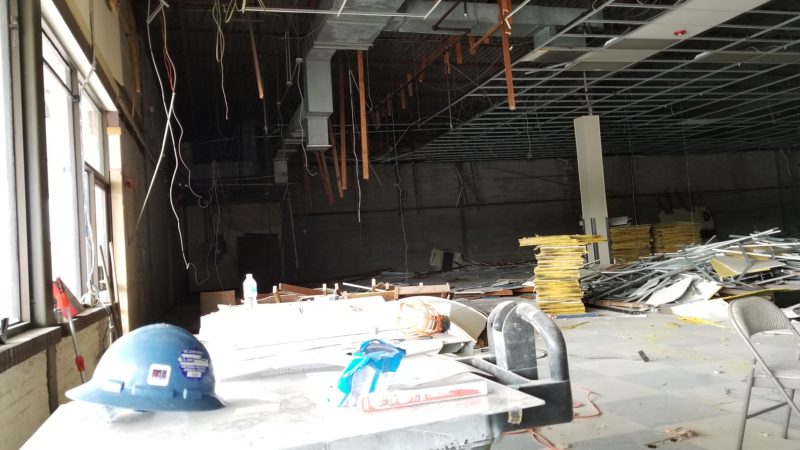 Now that we’ve got the building permits, the guys at RE Construction are busy chopping out all the ACME remnants to give us a wide open space. 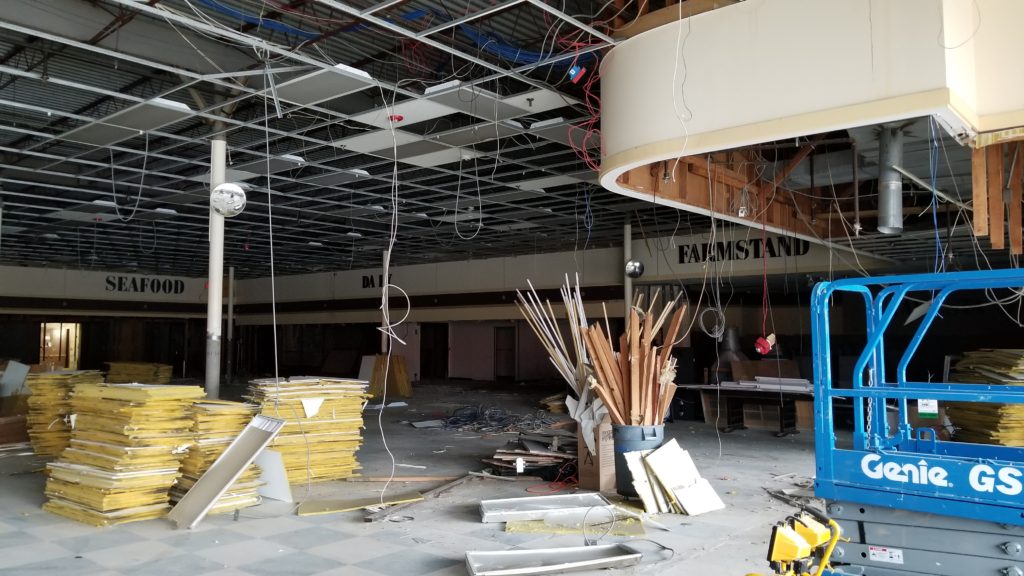 The scissor lift arrived, and by the time I posted this photo a whole lot more of the ceiling, and the remaining upper wall portions are being torn out. There’s already been a lot of progress since I took these photos.

That also means that the last few working light fixtures left over from the ACME have been removed – so it gets dark in there! You can also see a lot of old wiring. It looks like a mess but it’s actually much tidier than the “old wiring” we saw in other locations. Besides which, it’s all being removed so the brewery’s electrical wiring will be brand new. 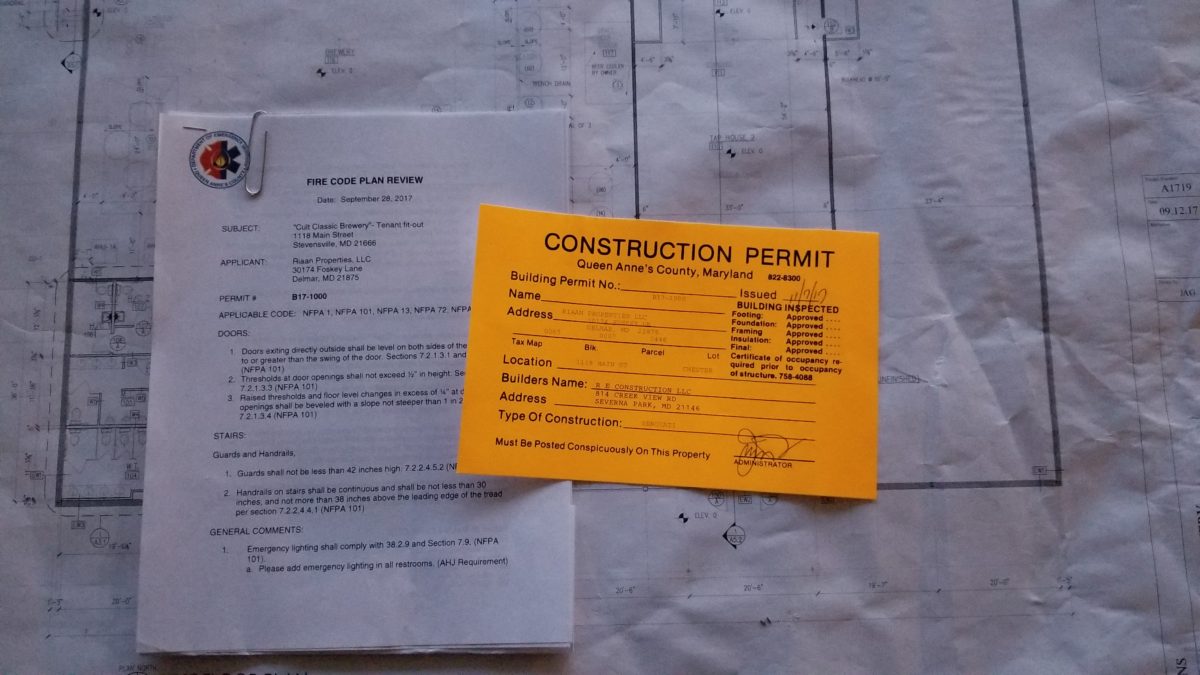 It took a while to get together all the various licenses & permits for interior & exterior renovations, electrical, plumbing, mechanical, groundwater and wastewater… but now all that stuff has been approved… and Queen Anne’s County has signed off on our Construction Permit!

Visibly changes will start coming a lot quicker now, so we’ll have more photos to post as RE Construction swings into high gear starting with interior demolition. Stay tuned for messy, messy photos…